I was pretty disappointed with the fashion at the Screen Actors Guild Awards. There were some pretty looks: Anne Hathaway in Azarro, Jennifer Morrison in Anne Valérie Hash Couture and Freido Pinto in Marchesa. And I loved the gold embroidery on January Jones’ Cleopatra-esque Andrew Gn gown. But nobody made me go, “Wow!” Granted, the SAGs aren’t the Oscars, but I still expected more creativity on the red carpet. As I’ve said before, I encourage getting inspired by what other people wear. But when you have a team of stylists at your beck and call, there’s no excuse to play copycat like these actresses below… 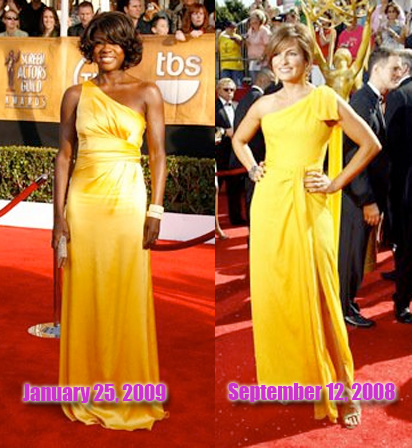 Considering yellow is my favorite color, I love seeing it on the red carpet. Viola Davis’ David Meister gown made her skin glow but it instantly reminded me of the one-shoulder Carolina Herrera Mariska Hargitay wore to the Emmys last September. Unless she got hit on the head on the set of Desperate Housewives and suffered a mild case of amnesia, I don’t how Eva Longoria Parker could have forgotten that she already wore a coral gown with a jeweled neckline. It was at the Emmys in 2005. And the curve-hugging Angel Sanchez was way sexier than this year’s Jenny Packham. All I can say is hated Nicolette Sheridan’s Roerto Cavalli just as much as the Gucci Kate Hudson wore to the 2009 People’s Choice Awards. It’s a different color, but Rosario Dawson’s Dolce & Gabbana is the exact same dress that Rihanna wore to the 2007 World Music Awards. Rosario even did her hair and makeup the same as the singer! Another exact copycat was Lisa Edelstein. Hers didn’t bother me as much, though, because she likely chose the Reem Acra gown before Gabrielle Union wore it to the BET Awards on January 17t.

This just goes to show that getting the look isn’t always a good thing.