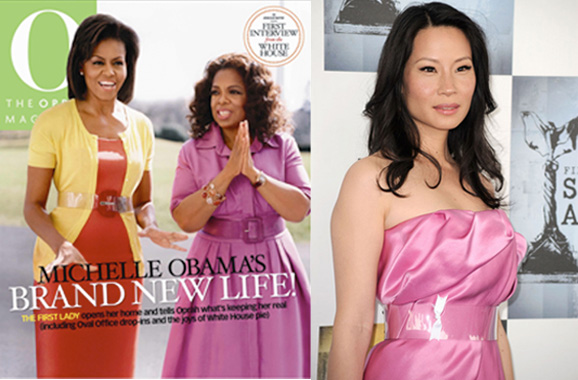 Today we learned that Michelle Obama is the first person, other than Oprah, to be featured on the cover of O, The Oprah Magazine.  If you google “michelle obama plastic belt” there are already pages and pages of people questioning our First Lady’s accessory choice. But I love it—and not just because it’s on Michelle Obama.

I wanted a clear belt after seeing Lucy Liu at the Independent Spirit Awards. I searched the Internet for 20 minutes but had no luck finding one. Today, I discovered one at French Connection, but it has colored piping. I’m not worried about finding one, though. Now that Michelle Obama wore plastic, you know we’ll be seeing plenty in the next couple of months—just look what happened to lemongrass after the inauguration!

Want to get Michelle Obama’s look for less? Check out mystyle.com’s shopping gallery.

*Update: A reader at Red Carpet Fashion Awards just found this Steven by Steve Madden clear belt ($17.90). I’m going to order it before it sells out. I’ll let you know how it is when it arrives!

*Update2: Don’t bother ordering the Steve Madden belt. My order was just canceled because they actually didn’t have the merchandise. Such a tease.