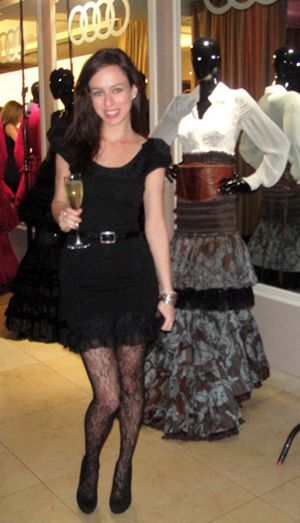 ttF Fashion Staples Series Diary: Sunday Ruffles & Lace
I came back early from San Diego today so I could get ready for Audi’s “Decades of Fashion” event to kick off awards season. Anna Paquin hosted the party at one of my favorite venues, the Terrace room at the Sunset Tower Hotel, and it showcased Gianfranco Ferré iconic looks chosen by Decades store owner Cameron Silver. You might remember him from an episode of The Rachel Zoe Project. He’s pretty fabulous. But the most fabulous look of the night had to be Glee‘s Dianna Agron’s feathered skirt and bustier.  I’m a sucker for pretty plumage.

As for me, I totally forgot about awards season when choosing my January Fashion Staples. Most of the staples this month are fairly casual but I was able to incorporate one into my cocktail look by belting a LBD I bought last year. It just so happened that the ruffles and lace tights matched Dianna’s bustier and my fave Ferré dress showcased at the event.