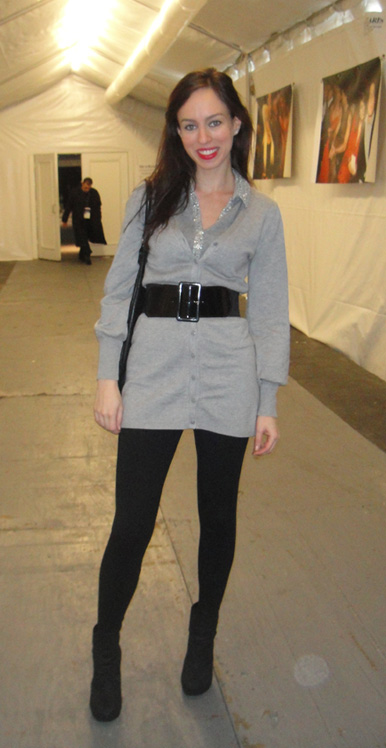 ttF Fashion Staples Series Diary: Front Row Sparkle
I was beyond exhausted this morning so I pressed snooze two too many times, which left me literally two minutes for makeup. Luckily, I brought my trusted Laura Mercier red lip pencil to New York. I was perfectly on trend: we’ve been seeing a ton of red lips for Fall 2010.

Despite my lack of sleep, today was absolutely amazing. I started off sitting next to Fern Mallis front row at Project Runway in the tents. Then I got interviewed after hearing Fern Mallis at an Independent Fashion Bloggers Tweet up in the American Express VIP skybox.  I ended the evening standing literally a foot away from Naomi Campbell and a rack of Alexander McQueen clothing backstage, before the supermodel and her famous friends stomped down the runway and held a tribute to the designer at Fashion for Relief.

And here’s a clip from AOL’s vlogger booth discussing Christian Siriano’s show. Mind you, I still had not slept at this point…

Twitpics of the day…

Get more from fashion week by following @sydnesummer and @mystyle on Twitter. And get more pics, trends and celeb scoop in my Fashion Week News Flash! gallery on mystyle.com.