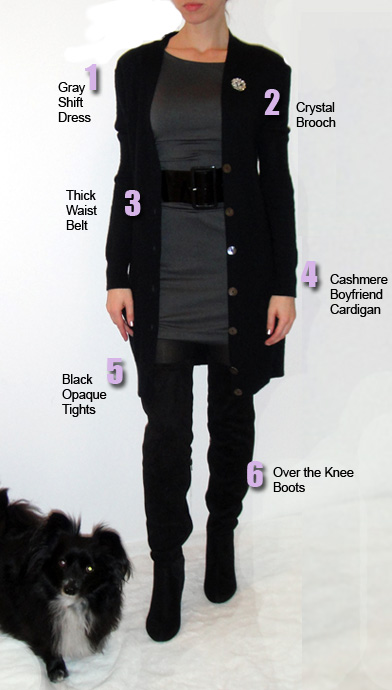 I based February’s ttF Fashion Staples Series outfit on Fashion Week. I’ll be attending the shows in New York so I wanted sleek staples that would make it easy for packing and walking in the city. Since this is a short month, I’ll have to combine many of the staples into various outfits. Here’s the breakdown of the 6 Fashion Staples I’ll be wearing at least 6 Different times for the next 28 days:

1. Gray Shift Dress (Forever 21)
A LBD is, of course, an essential that every woman should own. But when you don’t feel like wearing black, gray is an equally sophisticated neutral. I chose a shorter shift with subtle shoulder pads and draping at the waist. The rayon/spandex mix doesn’t wrinkle, perfect for a week of travel.

2. Crystal Brooch (Flea market find)
Long before I heard of Michelle Obama, I bedazzled cardigan with sparkly brooches. A basic crystal one goes with anything. I found this one in a London flea market.

3. Wide Waist Belt (Bebe)
A simple thick patent belt will always be in style as long as women want an hourglass shape. A stretch version is ideal if, like me, your weight fluctuates.

5. Black Opaque Tights (Target)
As fun as color and texture can be, solid black will always be a classic.

6. Over the Knee Boots ( Steve Madden Shakiraa Over the Knee Boots, $99.95)
For the past two years, I’ve been against thigh high boots. Last night, I had actually photographed this outfit with knee high boots. But after a conversation with my friend in New York I realized a) I don’t want to ruin my Robert Clergerie splurge while walking in the city and b) the more shoe that covers my legs, the warmer I’ll be. So after work today, I rushed to Steve Madden, picked up these microfiber and re-shot the outfit. For $100, I won’t cry if they get a little messed up.

And for the record, a dog is not a fashion staple. But Bunny, my chic canine blogger (she co-founded The Dogorialist), refused to let me have the spotlight and positioned herself in every self-timed photo. So she wins and gets another ThinkThruFashion appearance.