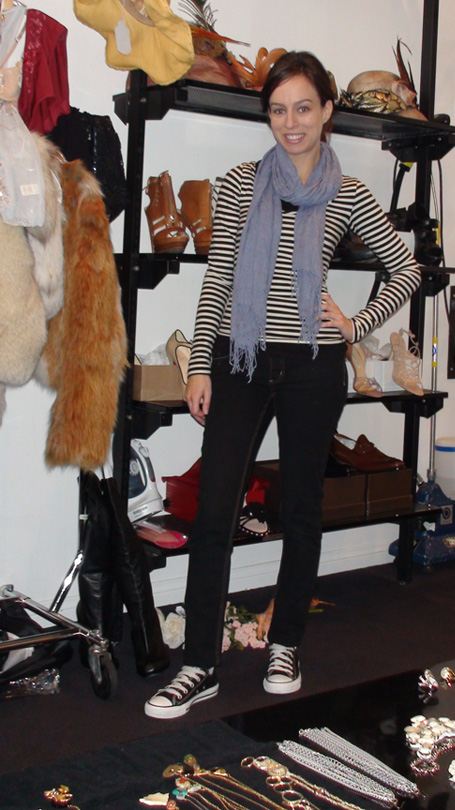 ttF Fashion Staples Series Diary: Styling Hard Shadows Day 2
After a ten hour work day, waking up at 7am was quite difficult. I threw on layers, which again came in handy for covering the lingerie-clad models between takes. Today we were shooting a music video, but using the same wardrobe as yesterday’s fashion spread. After picking out a few looks, we realized we needed some more chains. Luckily, my apartment was just around the corner so I scooped up my lia sophia, vintage necklaces and Erulinea crystal pendant and brought it to set. It was really fun seeing my accessories on the models.

Speaking of models, one of Tyra Banks’ number one rules in always wear a nude thong to go-sees. Clearly, not everyone watches America’s Next Model. I had to dash to Target to pick up some underwear before we got started.

But everything turned out amazing. I especially loved what Steve, the hairstylist on set, did with Amanda’s hair. At first, it was tightly coiled, and then as the shoot went on it started getting bigger and bigger into an über sexy mane, similar to Atelier Versace’s new spring campaign. Fierce would be an understatement. Also incredibly fierce? The futuristic Gucci dress that we didn’t get to use. One of the perks of being the same size as the models is getting to play in wardrobe. In the 20 minutes of downtime we had, Rey told me to try on the dress. I so did not want to take it off.

Just want to thank stylist Reinaldo Irizarry for such a fab fashion weekend. I can’t wait to see how the pics and video turn out!