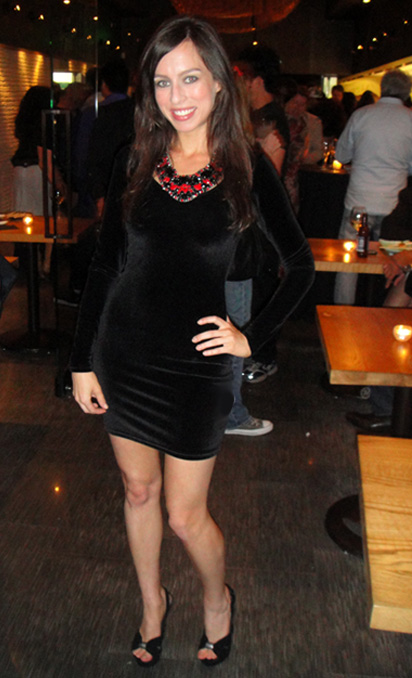 ttF Fashion Staples Series Diary: Velvet Tiger Nylon Night
I had literally not even ten minutes to get ready tonight. But sometimes being in a rush results in great outfit choices because you don’t have time to second guess yourself. Usually, I would have tried on a few necklaces to see which one I liked best against the velvet. Instead, I stuck with the first accessory I touched. I never would have thought to wear the bib necklace with this outfit but I really liked my last minute choice.

First stop of the night was the Tiger Sushi restaurant opening in Beverly Hills, where I had wine and yellowtail with friends including Marilynne and Dahvi (pictured below). Then it was off to the Trousdale for Nylon‘s anniversary party. I arrived at the same time as Mischa Barton, who despite what Brandon Davis tweeted, did not look fat whatsoever in a gold one shoulder dress. After catching up with more friends, I headed to Covergirl’s photobooth with Jamie aka the Queen of the Quarter Life Crisis. When we finished taking pics, Paris Hilton arrived with Nicky and in 5.2 seconds was standing up on couch, dancing above the crowd. Good to see not much has changed since I was Hollywood Party Girl.

Another thing that never will change? People love touching velvet. Every other time I hugged a friend hello they oohed and ahhed upon feeling the soft fabric.