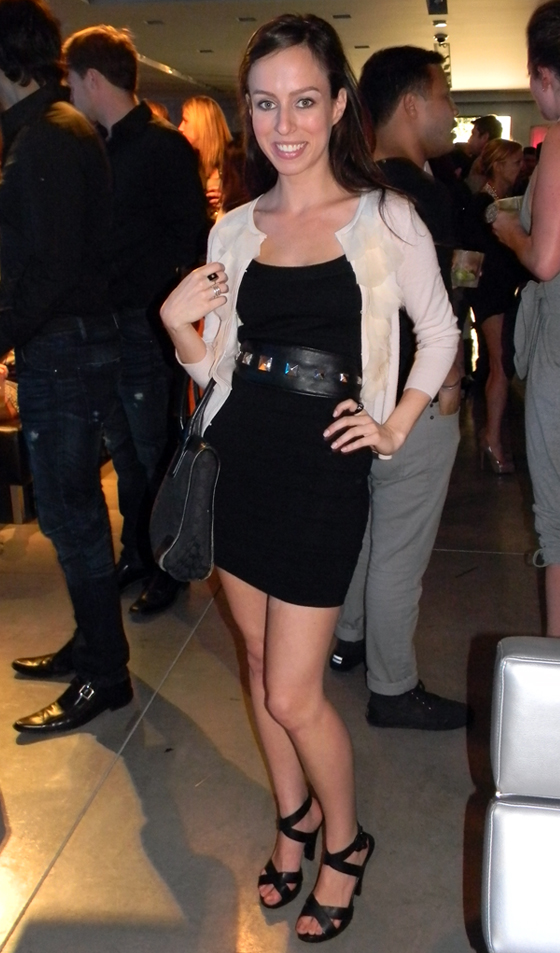 ttF Fashion Staples Series Diary: Disco Glam
Last night I brought my friend Jamie, the Queen of the Quarter Life Crisis, to Armani Exchange and Elle‘s Disco Glam party at the new A/X on Robertson. We pulled up behind Gabrielle Union, who was looking sultry in a navy romper and tights (I told you it’s been freezing in LA!) and before even going inside we walked past Rachel Zoe, who was glam as always in her sunglasses at night.

The bash was filled with pretty Hollywood regulars: Kim Kardashian in a slimming black jumpsuit, Jamie Lynn-Sigler in a modern Audrey Hepuburn-style dress and statement necklace, AnnaLynn McCord rocking yellow toenail polish with bright peep-toes! and Katharine McPhee in an adorable romper and wood wedges, which I want ASAP.

But Jamie and I were most excited to see the host of the evening, Joe Zee. The Elle Creative Director is always a doll. When a fan was taking a picture from afar, he told her to come over and take a photo with him. So sweet. And yes, I had to be a dork and take a picture with @mrjoezee as well.

I wonder what he would have thought of my outfit? My fave LA Times writer, Matt Donnelly, told me the belt was very timely being so Carrie Bradshaw-esque. It’s not my favorite accessory but I’m always a fan of mixing soft, feminine ruffles with leather and studs.