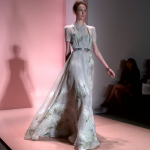 Jenny Packham
It was the British designer’s first show at Mercedes Benz Fashion week in New York. And for all those who couldn’t make the 9am start time, they missed out on true beauty. Jenny Packham’s inspiration read like a Jane Austen novel of “debutante balls and magical moonlit parties.” While the show opened with a sparkling tulle jumpsuit seem fit for young Hollywood, the rest of the looks were ageless. The hand-painted De Gournay florals would work equally as well on Selena Gomez as they would on Meryl Streep—as would the dressy pants. Deep cowl neck and cutout backs were tastefully sexy. But my favorite looks were the retro shirt dresses with crystal ribbon belts, which could be worn for daytime sparkle or an unforgettable night.
Trends: Beading, Tulle, Embellished Waist, Old Hollywood, Sheer, Embroidered, High-Waist Trousers Carolina Herrera
It’s rare that a show can give me chills. But Carolina Herrera did just that. Inspired by traditional Korean garb and 18th century botanical plates, the designer presented a spring collection fit for Asian royalty. Straw hats, typically worn by men in Korea, created a dramatic silhouette while large barrettes secured the models slicked back hair. There were vibrant prints, some of birds, others of flowers, complete with the botanical name written in calligraphy. Asian influences were abundant on obi bows and origami skirts. And the pleating and folds of organza, silk and jacquard showed Herrera’s veteran designing skills. When the models lined the front row, my absolute fave current catwalker, Lily Donaldson, stopped in front of me in my favorite crystal embroidered gown in the show. The designer took her final bow in her signature white button down and I was left with goosebumps.
Trends: Embroidery, Pleating, Asian Influence, Floral Prints, Bustle Skirts, Empire Waists, Jacquard, Wrap Belts Carlos Miele
You can always count on Carlos Miele for color. For spring, it was bright oranges, cobalt blues and lime greens. Some trends were a little reminiscent of other designer’s past collections from the butterfly prints (Vivienne Tam) to the exposed zippers (3.1 Phillip Lim). I much preferred the piping, beaded fringe and embroidered tulle—and the live performance of a singer Bebel Gilber covering Pink Floyd’s “Another Brick in the Wall.”
Trends: Exposed Hardware, White Dresses, Piping, Fringe, Coral, Blue, Lime, Butterfly Prints, Cutout Backs Monique Lhuillier
This season, the designer was inspired by a dream. I only wish I saw such visions when I was sleeping! Garden of Eden reptile prints and candy apple red were mixed in with colorful and metallic florals, soft ombré and sprinkles of fairy dust sparkle. And there’s no doubt that Holllywood’s red carpet princess will be requesting the glorious organza gowns that closed the show.
Trends: Red, Hand Painted, Floral Prints, One Shoulder, Mint, Metallics, Ombre, Animal Prints Alexandre Herchocovitch
The Brazilian designer presented a study in color, sending down models with monochromatic  looks from their hair and makeup to the dresses and Mykita x Alexandre sunglasses. Peach, blue, pink and green began the runway, and then mixed together in geometric patterns after the black. Saturated ombres were a real treat and the models got major points for balancing in stilettos—which  made last season’s YSL Trib Twos seem like child’s play.
Trends: Monochromatic, Round Sunglasses, Ombre, Jumpsuits, Brights, Geometric Betsey Johnson
Betsey Jonson always throws an insane spectacle. And this season was no exception. The show opened with a video of the designer bike riding around Lincoln Center. Then, models outfitted in crystal “Ride On” chokers hit the catwalk road. The first series were biker chicks, one who even skateboarded down the runway and lost a lucite heel! Next came playful printed twins, followed by a couple of homecoming queens. The sailors marched in the next round, complete with American flag boots. But my favorite part was the last series: neon lights. Who knew a gown could be so fun in day glow? And, in typical Betsey style, the show ended with a procession and her signature cartwheels. It’s always nice to see a designer have so much fun with fashion.
Trends: Neon, Cutouts, Nautical, Lucite, Gloves, Full Skirts, Polka Dots, Gingham