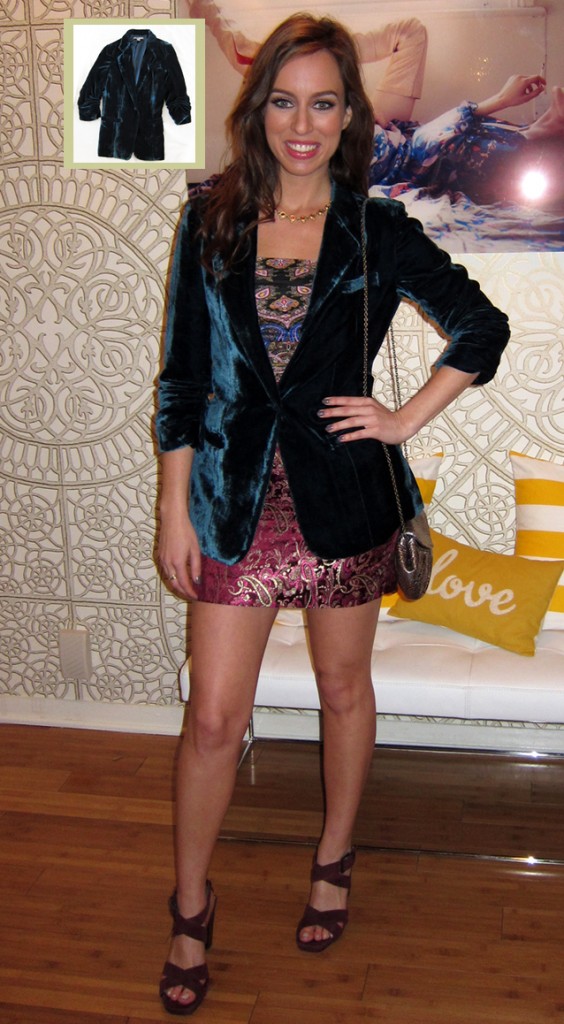 ttF Fashion Staple: Velvet Blazer
While getting ready for my friend Sinead Noreninus aka The Self Tanning Queen’s iFabbo party tonight I thought back to a post The Man Repeller did on Paisley Prints. Leandra Medine’s blog is absolutely hilarious, and I’ve become a loyal reader. But as much as I live for fashion, my style simply isn’t man repelling. But you can do some of the eccentric trends The Man Repeller features while still attracting both sexes. The trick is moderation.

While The Man Repeller went all out paisley, even posing on a Persian rug, I only let a portion of my prints peek through by covering up with a blazer. My top is actually a scarf, which I tightly tied behind my back then tucked into a brocade skirt. Keeping with the jewel tones I added this vintage necklace and rich purple suede sandals.

The result? At the mostly female blogger event at Bollare (how adorable is their entry way btw?) I got compliments on the velvet blazer and paisley DIY top. Later in the night at Soho house with Kristen, a man pulled out my chair (a major rarity in LA) and my ex’s cute friend was extra friendly. Yes, the opposite of man repelling would be the mini skirt. Show some leg and he won’t notice you’ve fashionably mixed prints.