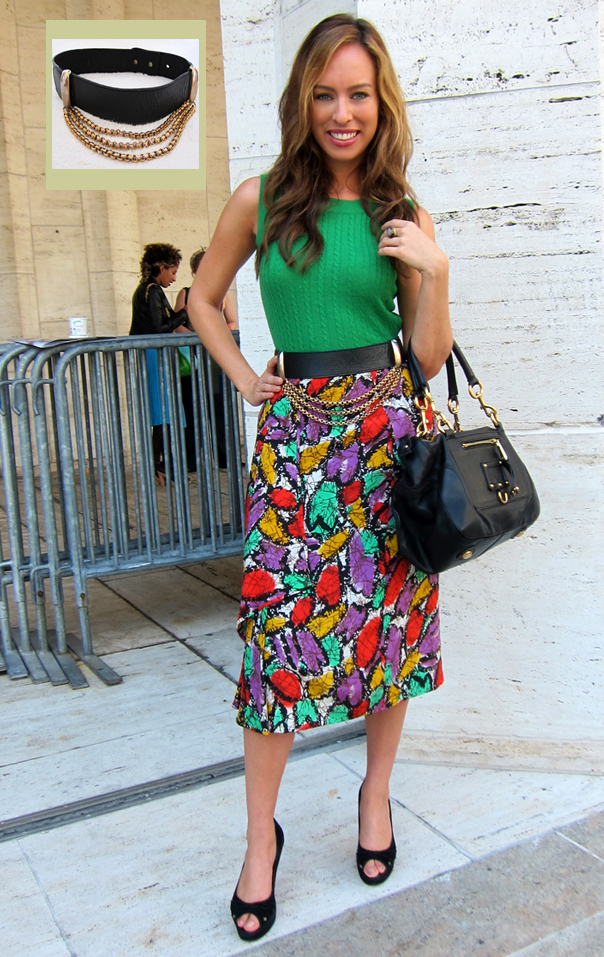 ttF Fashion Staple: Chain Belt
In addition to jewel tones, I’m excited about fall’s midi skirt trend. I bought this vintage one over the summer and figured fashion week was the perfect time to break it out. I originally was going to go with a black top but instead played into brights with Kelly green.

The morning kicked off in the American Express Skybox, watching Project Runway‘s finale show. My vote for the final three is Laura, Anya and Oliver, although all the designer’s collections were quite impressive.

Speaking of Project Runway, I got to chat with alumn Althea Harper, who is a style ambassador for Rowenta. I’ll share what she had to say in a video coming up soon!

Then, it was off to Luca Luca, where I fell in love with the vibrant colors and this vest. Next, it was off to MADE, to see Costello Tagliapietra. As you can see in the photo below, the American Express lounge had a mini pampering station so my hair went from curly to Victoria’s Secret bombshell as I waited to chat with the designers (you can read the interview on the AMEX Skybox Report).

Finally, I headed back up to Lincoln Center for Nicole Miller’s insane show. She headed back to the 80s and 90s with neon and prints, my fave being this dress. What a day!

Make sure to follow my Tumblr or on Twitter at @sydnesummer to stay updated for the week!