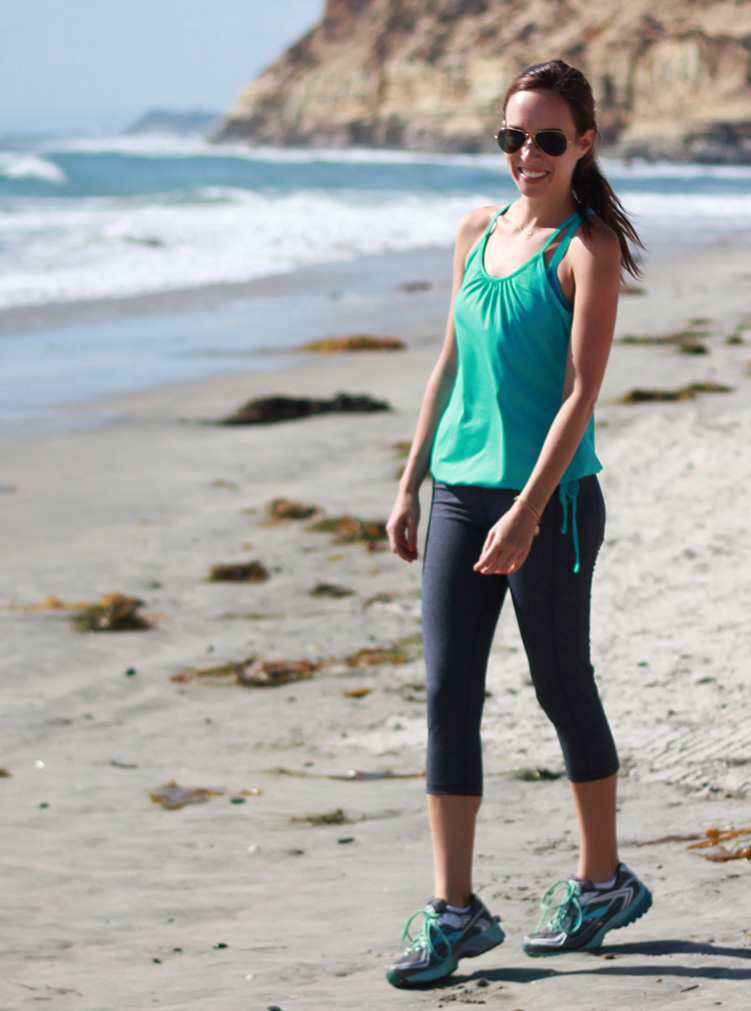 I’ve been getting a bunch of questions on how I stay fit. So I figured I would do a post with my top five summer workouts. Step one, of course, is to find the right gear. I really like Active by Old Navy because it works for all types of exercise (plus, it’s crazy affordable!). The compression capris ($19.99 $17) are incredibly comfy. And the bubble tanks ( $10) keep me cool while staying in place, thanks to a side-tie. I also like layering them over the adjustable strap sports bras ( $10) to create trendy color combos. For this workout look I was inspired by the Aquatic Trend. Now speaking of workouts, I like to switch up my routine. My goal this summer is to continue to exercise three times a week, using one of these five:

Xtend Barre
I’ve tried out many barre classes and this one is my fave so far. I go to the West Hollywood studio. The owner, Sam Robon, was a Moulin Rouge dancer in Paris and has the body to prove it, which is quite inspiring as you’re working out. It’s a mix between dance and Pilates, and the classes have a lot of variation so you never get bored. I’m usually sore for two days after each class.

Earth’s Power Yoga
I’ve never been into meditative yoga. I wish I had the patience but I don’t. If I’m taking out an hour of my day I want a workout, and Steven Earth Metz majorly delivers at his LA studio. It’s hot yoga, so you sweat out everything. And the poses are so intense that by the end of the class I feel like I had a deep tissue massage.

Runyon Canyon
I’ve been going on hikes at Runyon since I was a teenager aka before it was written up as the best place to spot a celebrity. While it’s more crowded then it used to be, I still love how you can escape the city for an hour without driving far. When friends want to meet for happy hour during the week, I’ll sometimes suggest a hike instead. You get the same amount of gossip in without the calories.

Bike Ride
I came back from Coachella with this awesome bike. So I’ve been trying to use it as much as possible! Biking is another great social activity. I’ll drive down to Santa Monica to meet a friend and we’ll go on a 15 mile bike ride in the morning. We get to chat and catch up before brunch. Then, having that extra mimosa doesn’t feel so horrible. It’s all about balance after all!

Beach Jog
I’m not a big fan of the gym and I really can’t stand a treadmill. I usually press stop after a mile. Jogging on the beach is much more interesting—and easier on the knees. I downloaded an app called Runkeeper so I know how far I’ve gone (this summer I’ve been trying to do 3 mile jogs). If you have an athletic dog, this is a great activity for both of you. My pup, Bunny Bell, prefers to only join in when it’s time to cool down and stretch.

What do you do to keep fit during the summer? This post is sponsored by Old Navy. Check out Old Navy’s latest fashion lineup in store or online at oldnavy.com. And check out their YouTube video featuring Cheryl Burke and Maksim Chmerkovskiy from Dancing With the Stars!