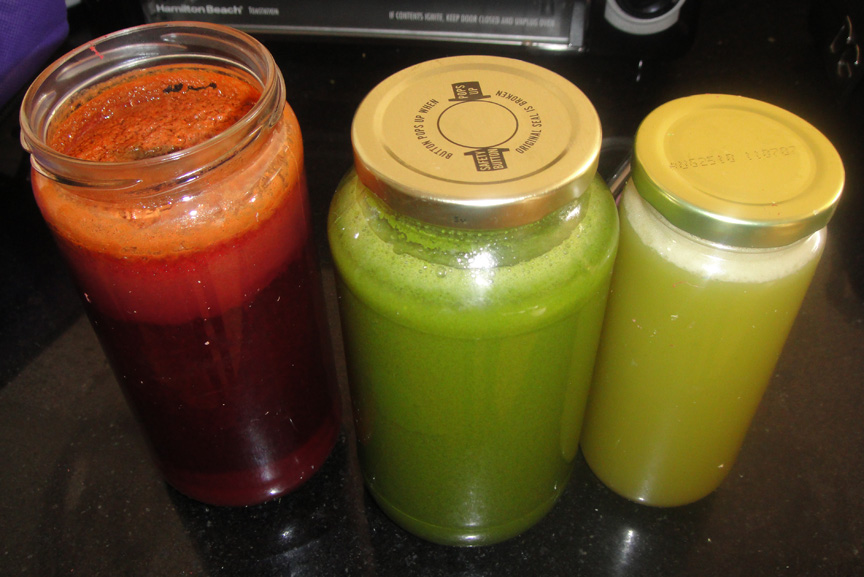 At fashion week a handful of bloggers received a three day complimentary cleanse from Blueprint Cleanse. I was not one of them. So instead of spending about $75/day to join my fellow fashion and beauty bloggers I tried a DIY version.

I spent $35 on fruits and veggies at the Hollywood Farmer’s Market and $8 on agave and cayenne pepper at Trader Joe’s. The company doesn’t list recipes but they provide ingredients. The Blueprint Renovation cleanse consists of Green Apple, Spicy Lemonade, Carrot Apple Beet Ginger Lemon, Pineapple Apple Mint and Cashew Nut Milk juices. I spent two hours juicing and came up with my own variations, but plenty to get me through three days. Not that it mattered, because I never made it that far…

Day One
9am: 1 cup Pineapple Mint Apple. Upset because my drain is clogged from disposing of the pulp when juicing the night before.
11am: 1 cup Green (made with romaine, celery, green apple, spinach, kale, parsley, lemon and agave)
12pm: Starving. Cheat and have a handful of shredded wheat. Hope it helps with my headache.
2pm: 1 cup Carrot Apple Beet Ginger Lemon with a little cayenne pepper (I forgot to make the Spicy Lemonade so I used cayenne pepper in other juices to make up for it).
3pm: Cheat again with another handful of shredded wheat. Headache’s still there.
3:15pm: 1.5 cups of Pineapple Apple Mint. Feel extremely bloated. Buy Draino.
5:30pm: Grape nuts with almond milk and cinammon (my crunchy substitute for BPC’s Cashew Nut Milk)
6pm: Pour Draino in kitchen sink. Nothing happens.
7:30pm: Drooling over the appetizers at Burberry’s 3D fashion show. Resist.
9pm: 1 cup Carrot Apple Beet Ginger Lemon with splash of cayenne pepper. Can’t stop thinking about pizza.
10pm: Way too hungry. Eat some hummus. Figure its semi close to juice?
1am: Finally full but still have a headache. Kitchen sink still looks like a swamp.

Day Two
10am: Pour more Draino in sink.
11am: 1 cup Green with splash of pepper. Despite all the juice I’ve been drinking my lips are chapped and now stained green. Thankfully I notice before anyone else does.
12pm: Stomache. Cheat with a handful of shredded wheat.
1:30pm: 1.5 cups Carrot Apple Beet Ginger Lemon
2:30: Headache returns. Cheat with another handful of shredded wheat
2:50: Feel extremely ill, like I’m going to vomit. Too much juice?
4:30: Cave with a bag of Pop Chips.
7pm: 1 cup of Pineapple Apple Mint. Even more bloated than early this afternoon.
9pm: Friend invites me to Flavor of India. My stomache accepts.
9:30pm: Chow down on Vegetable Thali and Naan.
11pm: Sink finally unclogged. Hallelujah.
12pm: Headache is gone. Go to sleep full and happy.

Day Three
10am: Obviously done with the cleanse but still have so much juice. Have 1.5 cups of my favorite, the Pineapple Apple Mint
11am: Half of a bagel. Better than my usual full bagel with cream cheese on bagel Thursdays.
2pm: Salad with chicken and veggies from Gourmet Bites. Trying to be healthy.
3pm: Peanut m&ms. Whatever, I’m over it.
5pm: Major stomache. Very major.

Two days later… Pour the remaining juices down the drain.

Lesson learned: Cleanses make you extremely bloated and leave you craving bad food. Well, at least that’s what happened to me. When I want to be healthy, I’m going to stick with fresh veggies, fruits and lean proteins that don’t have to be juiced—and won’t leave my sink clogged.